The Florence FRESH Meeting (European University Institute) opened with a session on Financial Markets. Andrea Papadia (LSE) showed that foreign debt repurchased by German citizens and companies in the 1930s helped the country to cope with sovereign risk, as recent advances in sovereign risk theory predict. Jérémy Ducros (Paris School of Economics) put forward possible explanations for the survival of the Lyon Stock Exchange during the expansion of a more centralized Stock Exchange in Paris. Pamfili Antipa (Bank of France) challenged the view that prices are exclusively determined by monetary policy, by illustrating the effect of fiscal shocks in Britan during the Napoleonic Wars.
In the session on International Flows of Goods and Labour, Gérladine Davide (Université Libre de Bruxelles and CentER at Tilburg University) compared the French art market during the Great War with that of the Second World War. She proves that art was not really perceived as a safe haven during the first global conflict, as the literature put forward.  Peter Bent (University of Massachusetts, Amherst) compared economic crises in US and Argentina at the end of the 19th century, putting forward that stagnation and recovery were driven by global dynamics affecting the price of agricultural products, rather than by protectionist policies aimed at developing the manufacturing sector. Marc di Tommasi (University of Edinburgh) shed light on patterns of immigration in Edinburgh on the eve of the 20th century. By drawing on an innovative analysis based on GIS, he suggested that clusters of migrants were mainly driven by occupation and by the workplace, rather than nationality itself and, as a consequence, chain migration.
Giovanni Vecchi (University of Rome Tor Vergata) presented the results of recent research on the well-being of Italians since the country’s unification (1861 – 2011). He focused particularly on the way economic inequalities were explored, by relying on a unique database of household budgets (IHBD, Italian Household Budget Database). His presentation was particularly fascinating for the audience: when the chair tried to say he was running out of time, many of the participants started to complain and asked him to go on!
One of the participant wrote: “I had a really great time at the meeting. It was stimulating to be exposed to such a wide range of research topics. Also, the feedback I received on my own work was extremely useful, and will help shape my future research. I appreciate having had this opportunity to connect with economic historians who are undertaking such innovative research”
The afternoon session was opened by Léa Rouanet (Paris School of Economics) who tracked health standards in former French West Africa. The project aims to reconstruct input and output measures of health to be compared to colonial health policies, towards a better understanding of the effect contemporary policies had on living standards. Laurent Heyberger (University of Technology Belfort-Montbéliard) outlined a reassessment of demographic trends in French Algeria, by relying on a new anthropometric dataset, which calls into question classic views on colonial history.

In the final session on Long-Term Perspectives and Institutional Legacies, Giulia Meloni (University of Leuven and LICOS) put forward convincing explanations for the rise and fall of Algeria in the wine market. While the country became one of the largest world producer and the largest exporter under the French rule (mainly as a result of a struggling French industry), its success led to increasing regulation and lobbying against Algerian wine by French winegrowers. When Algeria became independent, the tighter control of the wine industry by the state and the lack of native expertise led to its decline, which has persisted to the present day. Johannes Lessig (University of Jyväskylä) connected debt crises to money supply and cheap money, in an attempt to provide a comprehensive explanation of financial crises in the very long-term (1860 – 2010).

The Essex FRESH meeting, with a theme on migration in history, was held at the University of Essex on October 18. The participants greatly appreciated an excellent keynote address by Tim Hatton, Essex, who focused particularly on how to measure the wage profiles of immigrants in American history.
Among many excellent presentations might be mentioned one by Costanza Biavaschi from IZA, Bonn, Germany. She used American edition Scrabble word scores as an instrument for the ‘foreignness’ of immigrant names in the United States, in order to identify a causal effect of changing your name to something more American on immigrant earnings.
The next FRESH meeting will be at the European University Institute in Florence on December 6. See www.sdu.dk/en/ivoe/fresh for more information on forthcoming FRESH meetings. 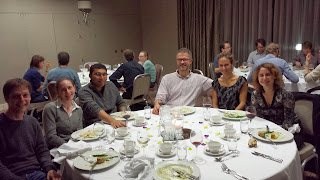 The dinner at the FRESH meeting
Posted by Unknown at 00:52 No comments:

The lessons of the 1930s, by Nicholas Crafts in Odense

‘The Macroeconomic History of the 1930s’ given by Nick Crafts, Warwick, and organized by the University of Southern Denmark, October 21-23, 2013, was a popular PhD course which brought together 13 PhD students and 4 senior colleagues.
A common theme of interest for the participants was the quantitative economic-historical analyses of the depression in the 1930s. Here, one of the PhD students motivates her interest in this topic:
“The financial turmoil which began at the end of 2007 generated a renewed research interest in topics like banking crises, sovereign debt crises and monetary unions. Past episodes of such experiences, like the Great Depression of the 1930s can offer valuable insights for current issues. Hence economists’ fascination with the causes and the sources of recovery of the Great Depression are clearly understandable.”
Nick Crafts is a big name in economic history and a fantastic speaker, which gave further motivation for attending the lectures. Using a very structured set of slides and his gift for making clear even difficult concepts, Prof. Crafts helped the students to understand the main debates and the overall picture, to evaluate the important empirical contributions, and to draw out implications for today’s policy debates.

This is the blog of the European Historical Economics Society. Our aim is to promote European research and training in economic history. We publish posts from events organized by the society, articles published in our journal (European Review of Economic History), interviews with leading scolars in economic history and other news related to the society's aim and its members. If you are interested in contributing to the blog, just be in touch with me.

Kerstin Enflo,
Editor of the blog