CfP: The nutrition transition and beyond: dietary change in the world since 1945 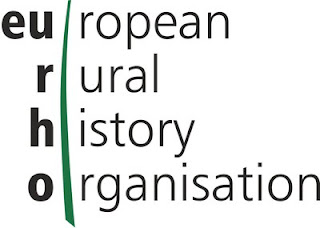 FERNANDO COLLANTES (University of Zaragoza) and ERNST LANGTHALER (Johannes Kepler University Linz) would like to propose a session on dietary change since 1945 for the upcoming Rural History 2019 conference (Paris, 10-13 September). As a preparation, they are happy to issue now this informal call for papers.

They would like to shape the session around three topics:

(1)  Major trends in food consumption in the world since 1945. All across the world, diets have been changing rapidly and profoundly in the period from 1945 to the present. In the global North, the postwar decades witnessed the rise of the “Western diet” rich in processed foodstuffs (meat, vegetable oils, sugar etc.) and the culmination of the “classical” period of the nutrition transition, while the last few decades have featured a turn towards differentiated products and qualitative substitutions (“food from nowhere” – “food from somewhere”). In the global South, some traits of a nutrition transition can be detected, but such transition seems to be unfolding in ways that do not necessarily mimic those of the global North at an earlier stage. One major area of interest for us is the measurement, description and identification of these major trends.

(2)  Causes of diet change. Changes in food consumption seem to be partly related to economic factors, such as the evolution of consumer income and food prices. These in turn connect the analysis of diet change to broader issues of economic growth, inequality and food chain dynamics. Yet, few would dispute that these economic variables exert their impact within specific political, social and cultural contexts (patriotic campaigns, social movements, religious norms, etc.), the study of which is essential to our understanding of the causes of diet change. They particularly welcome analyses of the causes of diet change that aim at capturing this interplay of economic, political, social and cultural elements.

(3)  Consequences of diet change. The most immediate impact of diet change has to do with consumer health. There is now widespread concern about the negative consequences of excessive, unhealthy food consumption styles in the global North, as well as an increasing awareness of the role of food security in human development in the global South. Yet, there are other, indirect consequences of diet change, such as those that impact on the environment or on social cohesion. Diet change since 1945 has probably contributed to intensifying the food system’s impact on the environment, but there are also signs of increasing consumer interest in organic, seasonal and regional foods. In the long run, the nutrition transition probably contributes to the making of a middle-class, mass consumer society, but the more recent turn towards differentiated foods and qualitative substitutions may well have started a new cycle of class-based differentiation.

They welcome paper proposals on these three areas, broadly defined. Interdisciplinary, cross-country analyses will be very well received, but we are also interested in papers that provide in-depth accounts of particular products and countries. Papers that are explicitly framed within theoretical perspectives from the social sciences are encouraged, but other papers will be considered as well.

If you want to join us for this session, please send us a title and a short abstract of about 200 words to our email addresses: collantf@unizar.es and ernst.langthaler@jku.at.

The deadline for this is September 28. Please realize that, in case that our session proposal is accepted, preference will be given to those of you who join us at this early stage.
Posted by Mikołaj Malinowski at 08:00 14 comments:

Well-being Inequality in the Long Run

In the last one and a half centuries, substantial gains are observed for well-being dimensions beyond per capita GDP (including health, education, political voice, civil liberties, and personal security) (Bourguignon and Morrisson, 2002; Morrisson and Murtin, 2009; Prados de la Escosura, 2015; Pinker, 2018). How have these gains been distributed? Do inequality trends in well-being dimensions concur? In a recent research I have tried to answer these questions presenting a long-run view of well-being inequality at world scale based on a new historical dataset (Prados de la Escosura, 2018).

How to measure well-being?
Most studies address inequality in well-being social dimensions using their original values (Becker et al., 2005; Bourguignon and Morrisson, 2002; Morrisson and Murtin, 2013) but as non-income well-being indicators have asymptotic limits that reflect biological or physical maxima, the range of variation is very narrow, forcing smaller gains (both absolute and relative) as their levels get higher (Sen, 1981; Dasgupta, 1990). The shortcomings of using original values (or, for the same token, its linear transformation) become more evident when quality is taken into account. Life expectancy at birth or years of schooling are just crude proxies for a long and healthy life and for access to knowledge. These objections are particularly relevant when the distribution of social dimensions of well-being is measured across countries and over time, as the use of original values unavoidably leads towards convergence. A way of mitigating such a spurious tendency is employing Kakwani (1993) non-linear transformation of health and education dimensions which for achievements of the same absolute size, imply that the higher the starting level, the larger its impact. 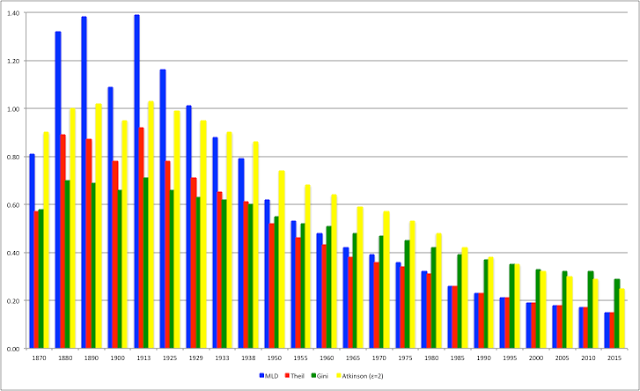 The diffusion of the health transitions has driven life expectancy inequality. During the epidemiological (or first health) transition that derives from the diffusion of the germ theory of disease, persistent gains in lower mortality and higher survival were achieved, since infectious disease gave way to chronic disease as the main cause of death (Omran, 1971). Thus, substantial achievements in longevity were attained. However, these gains were not shared equally within societies and across countries. Lack of economic means and basic scientific knowledge prevented it. The increase in life expectancy inequality in the late nineteenth and early twentieth century can be associated to the uneven distribution of first health transition initially restricted to advanced western countries (Figure 2). 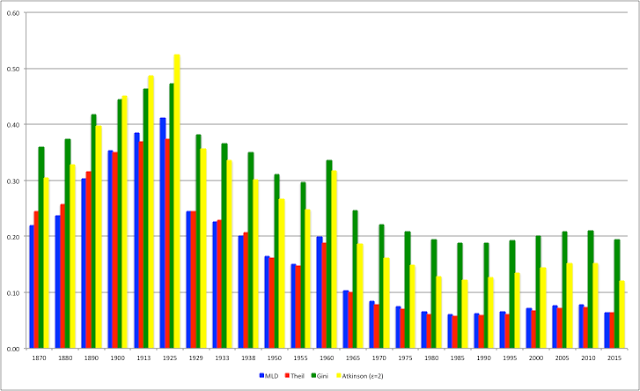 The gradual international diffusion of the health transition between the 1920s and the 1970s helps to explain the reduction in life expectancy inequality. Its contraction was particularly intense during the globalisation backlash (1914-1950), at a time of stagnant or declining average incomes in many countries and increasing international income inequality (Riley, 2005; van Zanden et al. 2014)). Improvements in public health –often at low cost, as low incomes prevented the purchase of the new drugs- and the diffusion of preventive methods of disease transmission and knowledge dissemination through school education contributed to reducing infant mortality and maternal death, two major determinants of the increase in life expectancy at birth in developing regions (Riley, 2001). At the turn of the 20th century, a new health transition emerged. In this new transition, mortality and morbidity have fallen among the elderly as a result of new medical knowledge that has permitted a better treatment of respiratory and cardiovascular disease and vision problems (Chernew et al., 2016). The rise in longevity has also been helped by better nutrition in early years of life. The result is people living not just longer life but longer healthy life years (Mathers et al., 2001; Salomon et al., 2012). Thus, the increase in life expectancy inequality after 1990 may be associated, not just to the impact of HIV-AIDS in Sub Saharan Africa or to the effects of the demise of socialism in Eastern Europe, but also to a second health transition so far restricted to the developed world. 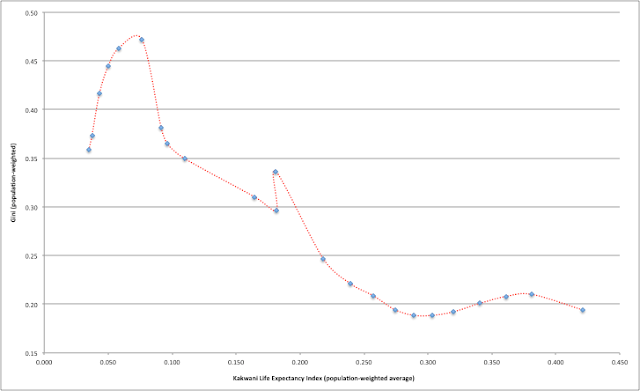 An association could be suggested between the level of longevity and its international distribution. The observed inverted U shape curve relationship between inequality and the level of life expectancy at birth could be deemed a Health Kuznets Curve (Figure 3). The driving force of the Health Kuznets Curve (HKC) would be the spread of the health transitions across countries. The uneven diffusion of the epidemiological or first transition would account for its rise, while its gradual diffusion across the globe would explain its decline. Moreover, it could be insinuated that the closing of the Health Kuznets Curve gave way to a new one. The new HKC appears to have been short-lived as longevity differences across countries resulting from the uneven diffusion of the second health transition (Cutler et al. 2006) have been offset, at least temporarily, by the recovery of life expectancy in Sub Saharan Africa and former socialist Europe. 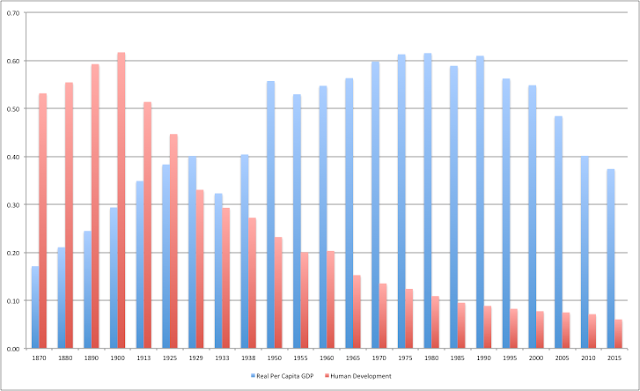 These findings are at odds with the view on long run inequality derived from real per capita GDP. While population-weighted income inequality increased until the third quarter of the twentieth century, inequality in social dimensions declined since World War I. Furthermore, the contrast between inequality in terms of income and human development (Figure 4) is striking and challenges the idea that per capita income provides a good predictor of welfare trends.

Posted by Mikołaj Malinowski at 02:54 5 comments: