Dr Tamás Vonyó has been awarded €1.49 million to conduct research on a 'Spoils of WAR' project, which aims to set a new standard in the economic history of the world wars by investigating how the First World War affected regional economic development and industrial organisation in the Habsburg Empire and its successor states. We can directly account for the impact of wartime resource allocation, independent from the outcomes of postwar political disintegration, using abundant, yet understudied, primary data on war contractors. We can detect how war spending affected the spatial concentration of industry, the economic structure of Habsburg regions, and business networks. Case studies on key industries can help to demonstrate how they perceived these changes and what strategies they developed to address them. The project will break through traditional boundaries between economic and business history and integrate the analytical tools of both disciplines. It will shift focus in the recent economic history of the wars from the Second to the First World War and use modern methods in historical economic geography and comparative business history.

The Dondena Centre for Research on Social Dynamics and Public Policy at Bocconi University will host the project between 2019 and 2023. The research team will include two post-doctoral researchers in economic history and two junior research fellows in business history. The vacancies for the two post-doctoral researchers are available here and here (deadline 1.December 2018).

Posted by Mikołaj Malinowski at 03:28 6 comments:

Posted by Mikołaj Malinowski at 02:58 3 comments:

Economic and social progress has been closely related to advances in human capital. Numerous studies have stressed its relevance for economic growth (Romer, 1986; Lucas, 1988; Gennaioli et al., 2013). In economic history, however, there are mixed views on the role played by human capital in economic development. While some studies claim it was fundamental, other studies cast doubt on this assertion. In recent years, however, there have been further attempts to stress the importance of human capital. For example, it has been argued that rather than the average level of human capital of a society what mattered was the “elite” or upper-tail of the knowledge distribution (Mokyr, 2009).

Having said that, it appears that one of the challenges, if not the main challenge, in this literature is identification, and hence measurement. Human capital is a broad concept (Goldin, 2015). In this study we look at human capital, captured with age-heaping and literacy, in a historical setting: Spain 1877-1930. For this, we use administrative data from Spanish population censuses between 1877 and 1930 (T=6) and calculate the level of age-heaping (Whipple’s index) by province (N=49) and gender. The Whipple index is then converted into an ABCC index for practical matters. Interestingly, the Spanish population censuses also offer information on the self-reported ability to read and write, which permit the comparison of both measures.

The main finding of this study is that age-heaping was relatively stable in the early population counts, both at the national and provincial level. In fact, it did only start to decrease in the early 20th century. This result goes in line with other works that claim that living standards in Spain only began to significantly improve in the early 20th century (Pérez Moreda et al., 2015; Martínez Carrión, 2016). Yet, this story is more difficult to reconcile with the existing evidence as regards to literacy. Literacy rates, as the figure below shows, experienced a gradual improvement since 1860 (Núñez, 1992). Besides, we also find that age-heaping was surprisingly low in certain areas. For instance, in the capital-city of Madrid and in the north-centre provinces age-heaping was trivial but literacy was still rather low (although this area exhibited the highest literacy rates within Spain). Likewise, gender gaps in age-heaping were negligible, even in provinces with striking differences between male and female literacy rates. 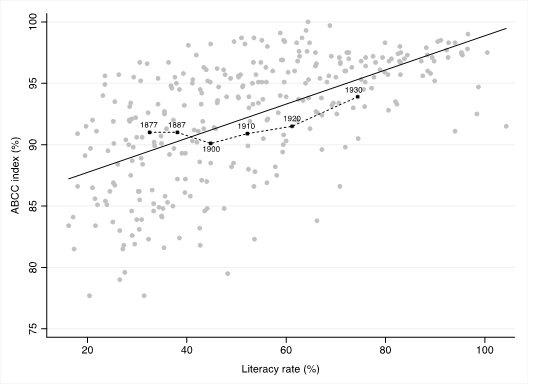 In sum, using administrative data from the Spanish population censuses this study shows that age-heaping remained unchanged in the second half of the 19th century while literacy, on the other hand, improved substantially. This, in turn, raises further questions. Age-heaping might result from poor numeracy skills, ignorance, or deliberate misreporting. However, the capacity of the public administration could somehow affect the effectiveness of the data collection process. Moreover, although these measures capture distinct skills one would expect certain complementarity. Theoretically, these two stories are expected to converge but our study shows that literacy and age-heaping did not go hand-in-hand until the early 20th century.