War inflation as an agent of income tax modernization

The World Wars were associated with progressive tax policies in most Western countries. Top marginal income tax rates increased to unprecedented levels, while other fiscal instruments, such as excess profits taxes, were implemented during the wars to meet the extraordinary revenue needs (Scheve and Stasavage, 2016).

In the income tax, this leap in progressive reforms came along with the broadening of the tax base, which brought for the first time low and middle incomes into the tax (Brownlee, 1996; Broadberry and Howlett, 1998, 2005; Rockoff, 2012). This fundamental transformation was the result of both regulatory changes, which reduced exemption limits and personal deductions, and high levels of inflation, which eroded the real value of these same exemption limits and deductions, pushing incomes previously excluded from paying the tax into the fiscal net (even though their real incomes did not increase).

Our latest paper published in EREH (Torregrosa-Hetland and Sabaté, 2021a) quantifies the role that inflation played in the downward expansion of the tax during the World Wars. We first clarify and estimate the ways in which inflation affects the distribution of income tax due across different levels of income, and, second, calculate its effects on tax progressivity and redistribution. Specifically, we analyze the income taxes of Sweden, the United Kingdom and the United States, by comparing the actual operation of the tax with alternative counterfactual scenarios of lower or no inflation (here, as in the paper, we concentrate on our first counterfactual, defined by the level of inflation over the five pre-war years). The exercise is based on disaggregating the original tabulated tax data (following Blanchet et al., 2017), and imputing income tax payments to the synthetic observations according to the regulations in place (see also Torregrosa-Hetland and Sabaté, 2021b).

Our results show that inflation was indeed a powerful mechanism for the downward expansion of the tax. By the end of World War I, 75% of British taxpayers had been incorporated into the fiscal net by excess inflation. This figure reached 68% and 38% in Sweden and the United States respectively. The impact of inflation by 1920 in Sweden was so extreme that these new taxpayers amounted to 28% of the total tax units in the country (i.e., of the total number of potential tax returns if everyone would have been required to file). During World War II, nearly 4 million British taxpayers started paying the tax for no other reason than nominal increases in their incomes (see Table 1).

Inflation did not only bring new taxpayers into the tax, but also pushed existing taxpayers into higher tax brackets (due to the erosion of the real value of bracket limits and deductions). As a result, inflation was responsible for as much as 80% of the income tax revenue in Sweden in 1920, and near 65% and 57% in the United Kingdom and the United States in 1919 (see Table 2). Of this additional “inflation revenue”, the majority was paid by existing taxpayers that had been pushed into higher tax brackets (84% in Sweden by the end of World War I, and above 90% in the United Kingdom and the United States; see Table 3). New taxpayers entered massively into the tax during the two wars, but their relatively low effective tax rates (particularly during World War I) made the revenue impact more modest in absolute terms.

Table 3. Distribution of the additional revenue caused by inflation between taxpayer groups

Inflation made the income tax less progressive, but more redistributive

What was the impact of these changes in the progressivity of the income tax? Since the increases in tax burden were, in relative terms, more intense at the bottom of the income distribution, inflation had a regressive effect. This was particularly true in the United Kingdom during World War I. Figure 1 and 2 show the extent to which low and middle incomes became subject to higher average effective tax rates by the end of the wars due to inflation. 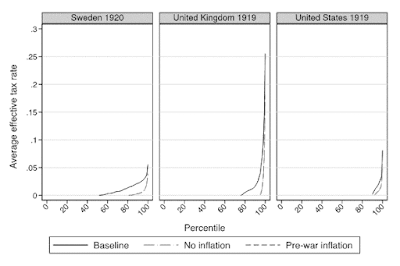 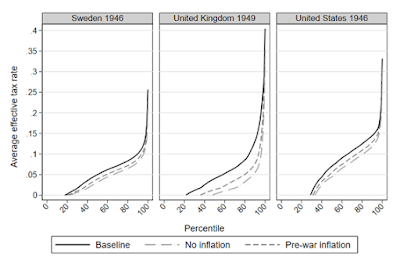 Interestingly, though, the impact of inflation on redistribution was positive. While inflation reduced the level of progressivity, it increased the size of a still progressive tax, which in turn increased the amount of income that was placed into the redistributive channel. For instance, the British income tax reduced inequality by 5.11 Gini points in 1919, and no less than 28% of this effect was caused by accumulated excess inflation since 1913. In this way, inflation was one of the drivers of the transition from a ‘class tax’ into a ‘mass tax’: one that obtained revenue from most of the population, forming a strong basis for fiscal citizenship, and which became one of the major redistributive instruments of the post-war era/for decades to come.

ROCKOFF, H. (2012). America’s Economic Way of War. War and the US Economy from the Spanish-American War to the Persian Gulf War. Cambridge: Cambridge University Press.

SCHEVE, K., and D. STASAVAGE (2016): Taxing the Rich. A History of Fiscal Fairness in the United States and Europe. Princeton University Press.

TORREGROSA-HETLAND, S., and SABATÉ, O. (2021a): 'Income tax progressivity and inflation during the World Wars', forthcoming in European Review of Economic History.

TORREGROSA-HETLAND, S., and SABATÉ, O. (2021b): 'Income taxes and redistribution in the early twentieth century', Lund Papers in Economic History: General Issues; no. 224.