It has been accepted that colonists in settler colonies were willing to shoulder unusually high tax burdens to assert their self-rule and autonomy. Was this willingness to shoulder high tax burdens by the colonists generalized through the British Empire? To explore this question, I study and compare the Cape Colony’s fiscal path to the experiences of Australia, New Zealand, and Canada.

How did the tax to GDP shares evolve in each colony? Figure 2 shows the Tax to GDP ratios of the four colonies. What is clear is the divergent trend for the Cape, especially from the second half of the 1880s. Australia, Canada and New Zealand managed to maintain modest increases, but the Cape’s ratio fell from around two to one per cent. Despite economic growth which surpassed some Australian colonies in some years (Magee, Greyling, & Verhoef, 2016) there was less progress being made on the fiscal front. 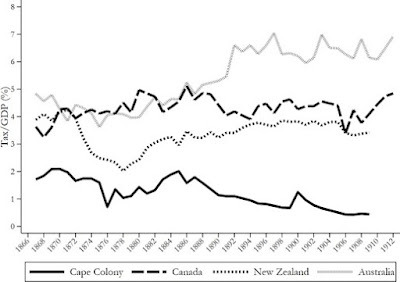 The phase from 1876 to 1885 shows a possible catch-up trajectory, but this was not sustained. The patterns in the Cape belie earlier generic conclusions, arguing that colonies with responsible governments benefited from unoccupied lands and turned the "free resources into funds to support public expenditures" (Davis & Huttenback, 1986, p. 224). Figure 2 below shows the plot of recursive estimates of the tax capacity regression on the Cape dummy when tax per capita is estimated using the total population (left-hand) and the settler population only for the Cape (right-hand). The estimate considers the differences between the Cape as a whole, and the ‘Cape-settler’, which only looks at the European settler population. 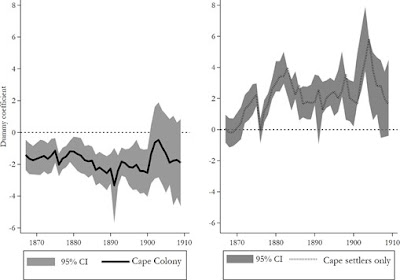 Figure 2: The Cape Colony’s tax per capita relative to other colonies

The logic behind this separation is two-folded. Firstly, the number of indigenous people in the Cape Colony represents a much larger proportion than in the other colonies, and the second reason lies in the (deliberate) exclusionary policies and practises that existed in the Cape.

The clear picture is that the Cape Colony’s per capita taxes were systematically lower than the other colonies. Controlling for racial structure by excluding the indigenous population shows that the settler enclave might have experienced higher taxes per capita than settlers in other colonies. This is so with the caveat that the tax per capita for only the settlers does inflate tax capacity given a lack of basis of accurately measuring what the indigenous people contributed (Feinstein, 2005). What is clear is that on average the Cape Colony’s per capita taxes did show signs of converging to the trends of the other settler colonies when diamonds were discovered in 1867. Settlers preferred indigenous people to be taxed but they also organised public goods delivery to exclusively towards the settler enclave, with minimal ‘leakages’ to the indigenous people. Mkandawire (2010, p. 1651) aptly refers to this as a ‘racist’ welfare state. Given that land and mining taxes were important surrogates of income taxes in other colonies (McLean, 2012; Sanders, Sandvik, & Storli, 2019), the loss at the Cape had long term fiscal ramifications.

Was the Cape Colony “recklessly extravagant” on borrowing?

The Economist reported in 1883 that the “Every year since 1875 has found the Cape government a fresh borrower in the London market…she has been recklessly extravagant” (The Economist 1883, p.1576). The study uses debt to GDP, bond yileds and the spreads over the British consolidated annuities (consols)to trace levels of indebtedness. This is inline the ‘empire effect’ litreature which argues that British colonies had low intrests rates and tended to enjoyed investor good will despite poor economic fundamentals (Ferguson & Schularick, 2006; Gardner, 2017). Potentially, this could be misused since the hard work of building fiscal capacity could be reneged on and be replaced by borrowing (Accominotti, Flandreau, Rezzik, & Zumer, 2010, p. 49). Figure 3 below shows that the Cape was at the higher end with high levels of debt and risk of default shown by the highest level of yields and debt/GDP, which in light of poor fiscal capacity made vulnerable to default. 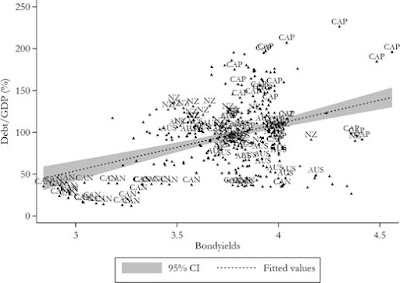 Both taxation and debt patterns demonstrate a unique path for the Cape with comparatively low per capita taxes, high deficits, and the highest level of indebtedness. Had the colonists in New Zealand, Australia and Canada met similar conditions as those at the Cape, were their policies going to be different? For instance, McLean (2012) argues that if an institution was harmful to Australia’s prosperity, "it was either abolished or modified to make it growth-promoting". This is at times referred to as ‘institutional flexibility’ (McLean, 2012, p. 29). What held back the Cape colonists? One aspect is worth pointing out. The share of indigenous population which was fundamental to the question of who could access and have rights to the natural resources, mainly land and minerals. The Cape’s ‘moral economy’ restricted potential revenues by narrowing rights to a few, even amongst the Europeans themselves.

Similar to what Frankema & van Waijenburg (2014) argue for French vs British colonies in Africa, I question the ‘purchase’ or instrumentality of labels such as ‘responsible government’ since the endogenization of these imported institutions in the Cape produced outcomes leaning towards what research has shown for fiscal systems in Spanish colonies in Latin America. I also argue that it is also important to bring balance to the analysis by questioning the assumed superiority of institutions of the other settler colonies. The ease with which the institutions of ‘responsible government’ benefited the other colonies should be measured and assessed relative to the lighter challenges they faced relative to the Cape. This allows the appraisals to be balanced in terms of how the Cape settlers are judged compared to those in other settler colonies.

Was the Cape settler colonialism exceptional? Recent research has shown that both on the African continent and in the world, South Africa was much less of an exception up to 1920s than it became in the 1970s (Ross, Mager, & Nasson, 2011, p. 15). The share of indigenous population which was fundamental to the question of who could access and have rights to the natural resources, mainly land and minerals, impinged on the development and consolidation of the fiscal system. Hence the ‘moral economy’ which sought to cater for the settler enclave reduced the taxable capacity amongst the indigenous majority, ultimately shrinking the taxable capacity of the entire economy.