By Francisco J. Beltrán Tapia and (Norwegian University of Science and Technology; CEPR) and Francisco J. Marco-Gracia (University of Zaragoza; Instituto Agroalimentario de Aragón). Blog post based on the article with the same name published in the European Review of Economic History (here).

Many pre-industrial societies regulated population size by resorting to infanticide and the mortal neglect of unwanted infants and children (Langer 1972; Harris and Ross 1987; Hrdy 1999). These practices have traditionally targeted girls in India, China and Japan, among other countries characterised by strong patriarchal traditions that favour males (Das Gupta el al. 2003; Bhaskar and Gupta 2007; Drixler 2013). Women’s status in historical Europe was definitely more advantageous than in other parts of the world but Europe was not a gender-equal paradise and women were discriminated against in many dimensions (Szoltysek et al. 2017; Carmichael and Rijpma 2017; Dilli et al. 2019). In this regard, although the traditional narrative nonetheless defends that European families did not neglect their female babies (Derosas and Tsuya 2010; Lynch 2011), several studies suggest that female infanticide, as a means of controlling the size and sex composition of their offspring, was more widespread that commonly thought, especially in Southern Europe (Hanlon 2016; Beltrán Tapia and Raftakis 2021; Echavarri 2021).

By relying on the parish records of all the population living in a rural Spanish region between 1750 and 1950 (almost 60,000 individuals), this article evidences that discriminatory practices increased female mortality shortly after birth. Firstly, aggregate sex ratios obtained from baptismal records were exceptionally high, at least until the late 19th century (figure 1). Secondly, the individual-level information shows that the probability of being male at baptism was significantly higher when there were no previous male siblings alive, a feature that could trigger discrimination in the presence of son preference. Likewise, as evidenced by death registers, female survival chances during the first one or two days of life were also negatively affected by this same feature, as well as by the number of siblings alive. These findings seem to be concentrated at higher parities and among landless and semi-landless families which were subject to harsher economic conditions and therefore more likely to resort to extreme decisions under difficult circumstances. 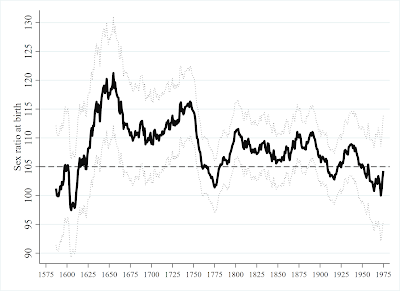 Crucially, the fact that the results are robust to employing data from birth and death registers rules out the possibility that under-registration explains this pattern: although female misreporting would bias sex ratios at birth upwards, it would have the opposite effect on mortality rates. Taken together, these findings strongly support the idea that a significant fraction of female babies were neglected or disposed away. These discriminatory patterns affecting female mortality shortly after birth disappeared during the first decades of the 20th century, as soon as the demographic transition and other economic, social and cultural changes reduced general mortality rates and undermined the strong son preference detected here.

The mortal neglect of girls shortly after birth was probably a conscious family decision that affected a number of families under certain circumstances. Apart from the need to provide dowries for their daughters, the fact that there existed less female waged labour opportunities also militated against girls. The sources are though silent regarding how these girls went missing. There were of course many ways of disposing of unwanted children and these crimes were easy to commit and difficult to prove (starvation, dehydration, strangulation, drugged to death, smothering, exposure to elements, etc. It is also plausible that families could have not striven enough to keep them alive especially during the crucial first hours of life. Given that there is hardly any anecdotal evidence on female infanticide, our findings suggest that some families disguised female infanticide or neglect as natural deaths.

The evidence provided here shows that families especially targeted girls, but boys could have undoubtedly fell victims to these practices as well. This article therefore not only challenges the notion that there were no missing girls in historical Europe, but also suggests that these families regulated the size and sex composition of their offspring. These findings have important implications for our understanding of the traditional demographic regime and the subsequent transition to lower fertility and mortality rates because the relatively low number of children raised by these families cannot be longer explained solely by the use of different methods to reduce fertility either indirectly (delaying age at marriage or celibacy) or directly (spacing or stopping). By increasing the mortality of their unwanted children, these families also adopted a “death control”. The gradual disappearance of these practices would therefore partly contribute to explaining the decline in fertility and mortality that took place during the demographic transition. Likewise, the fact that many of these deaths escaped from birth and death registers also indicates that fertility and mortality rates in these areas were higher than what it has been traditionally assumed.