Human Development in the Age of Globalisation

In a new EHES working paper, Leandro Prados de la Escosura (Universidad Carlos III and CEPR) analyses wellbeing which is widely seen as a multi-dimensional phenomenon affected not only by material goods, but also health, education, agency and freedom, environment, and security (Fleurbaey, 2009; Stiglitz et al., 2009). Among the multidimensional approaches to well-being human development has been defined as “a process of enlarging people’s choices” (UNDP, 1990; 10; 1993:105). The working paper is available here. This post has appeared in Vox.eu and it is reproduced here.


In a new paper, I approach long-term well-being with an augmented historical human development index (AHHDI) that combines new measures of achievements in health and education, material living standards, and political freedom (Prados de la Escosura, 2019). The AHHDI shows that world human development steadily improved over the last one-and-a-half centuries raising its level 5.3-fold since 1870. Still, the world average level remained below 0.5, on a 0-1 scale, in 2015. 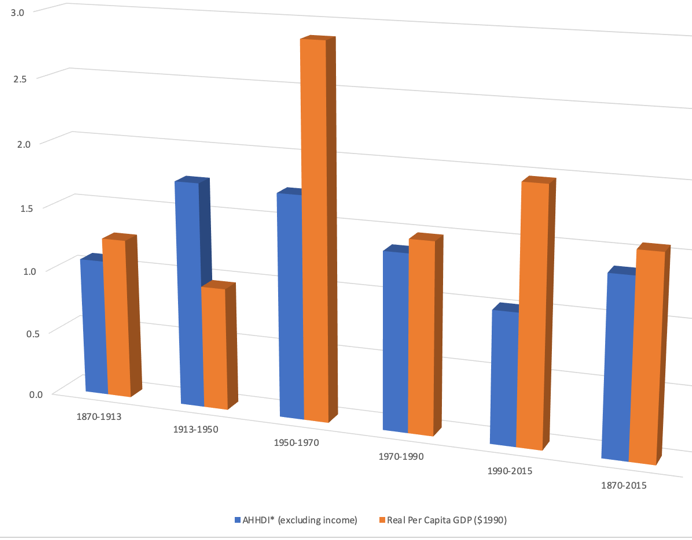 Human development (excluding the income dimension) exhibits similar but slightly slower long-run growth than GDP per person (1.4% and 1.6%, respectively), throughout 1870-2015. A closer look reveals, however, that the pace at which human development progressed did not match that of real per capita GDP, with substantial discrepancies over 1913-1970 and since 2000 (Figure 1). During the phase of globalisation backlash (1914-1950), real per capita GDP growth slowed down across the board as commodity and factor markets disintegrated, while human development thrived, particularly in less developed regions. Conversely, in the post-1950 era, human development has advanced significantly less than real GDP per head. 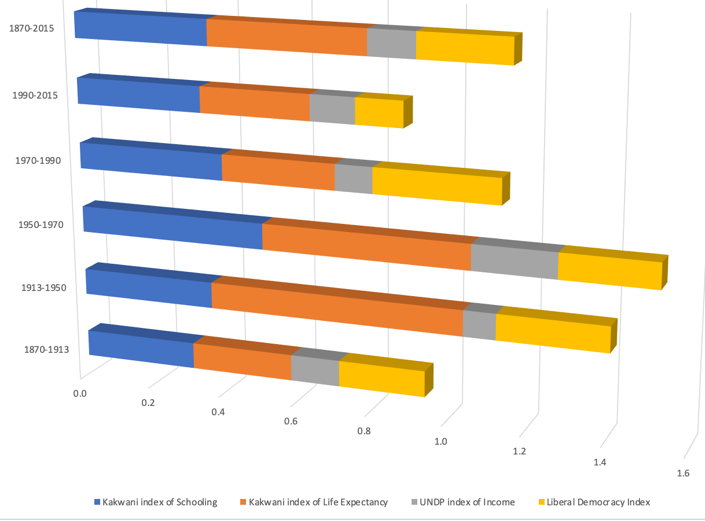 Advances in Human Development were unevenly distributed across world regions. An absolute gap between the OECD and the Rest broadened throughout 1870-2010. In relative terms, however, the gap waned since the beginnings of the twentieth century, especially in its central decades and, again, from 1990 onwards so, by 2015, human development in the Rest represented over half that of the OECD, doubling its share a century earlier. The evolution of the Rest vis-à-vis the OECD in terms of human development is at odds with that in terms of per capita income, that presents a sustained deterioration, from nearly one-third of the OECD level in 1870 to less than 15 per cent in 2000.

Catching up to the OECD in terms of human development has taken place in the Rest since 1900 and, especially, in the 1930s, the Golden Age (1950-70), and during the last two decades of the twentieth century, with education making the single most important contribution over the long run (Figure 3). Longevity emerges as the main dimension behind catching up in the early twentieth century, the 1920s particular, when a large proportion of the Rest was under colonial rule, and especially, in the 1960s, at the time of active public policies across the board and China’s recovery from the Great Leap Forward debacle. Lastly, political freedom was the leading force behind catching up prior to World War I, in the 1930s and 1950s, and over 1980-2000. 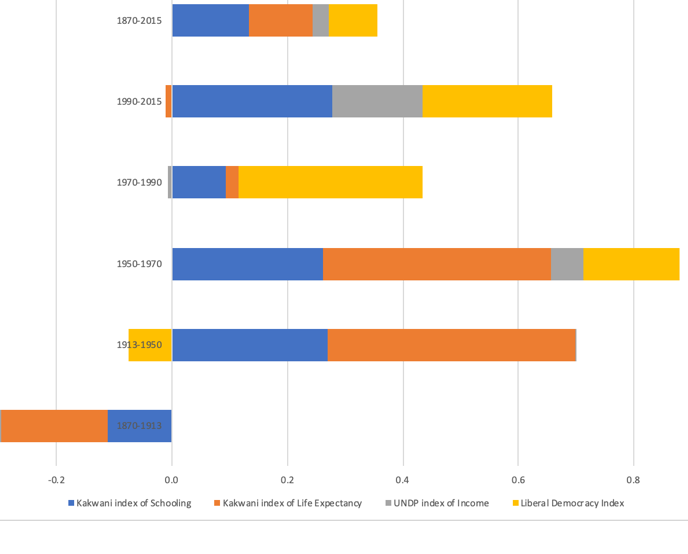 Why was the contribution of longevity to enhancing human development largely concentrated in 1920-1970? Health improvements can be depicted in terms of a health function (Preston, 1975; Easterlin, 1999). Movements along the function represent gains attributable to economic growth and result in improving nutrition -which strengthen the immune system and reduce morbidity (Fogel, 2004)- and increasing the public provision of health (Cutler and Miller, 2005). Outward shifts in the health function represent improvements in medical knowledge (Riley, 2005; Cutler et al., 2006). The advancement in medical knowledge originated in the discovery of the germ theory of disease (Preston, 1975) that led to the epidemiological or health transition in which persistent gains in lower mortality and higher survival were achieved as infectious disease gave way to chronic disease as the main cause of death (Omran, 1971). The germ theory of disease led to the introduction of new vaccines (since the 1890s) and drugs to cure infectious diseases (sulphonamides since the late 1930s and antibiotics since the 1950s), along chemicals such as DDT, instrumental in battling malaria (Easterlin, 1999; Jayachandran et al., 2010; Lindgren, 2016). However, the germ theory of disease had another far from negligible effect: the diffusion of preventive methods of disease transmission and knowledge dissemination which through schooling and low cost improvements in public health had a profound impact in less developed regions where low incomes precluded the purchase of the new drugs. As a result, mortality declined throughout the life course with special impact on infant mortality and maternal death (Riley, 2001). The epidemiological transition spread beyond the most advanced regions, namely, Western Europe, the European offshoots, and Japan (OECD hereafter), since the 1920s, a finding at odds with the view that dates health improvements outside the West only since the 1940s as the absence of drugs and the lack of concern of colonial rulers prevented it (Acemoglu and Johnson, 2007). By 1970, the epidemiological transition was largely exhausted helping to explain life expectancy’s declining contribution to human development thereafter.

Since 1990 a second health transition with result of better treatment of respiratory and cardiovascular disease and vision problems, has led to mortality falling among the elderly, helped by better health and nutrition in their childhood (Eggleston and Fuchs, 2012; Deaton, 2013). The diffusion of new medical technologies has resulted in longer and healthier life years (Mathers et al., 2001; Hay et al., 2017). This second health transition has been so far restricted to the OECD. The AIDS-HIV pandemic in Sub Saharan Africa and the collapse of socialism, plus the lack of public policies, help to explain life expectancy’s negative contribution to catching up in the Rest since 1990.