Any lessons for today? Exchange-rate stabilisation in Greece and South-Eastern Europe between economic and political objectives and fiscal reality, 1841-1939

The Greek financial crisis has laid bare serious economic fragilities in the South-Eastern corner of the 19 member strong euro area: a government debt stock of 170% of GDP, a dangerous bank-sovereign embrace, and an economy in its seventh year of recession which has declined more than a quarter since its 2008 peak.

In tandem with the process of weakening economic data, politics has become more difficult to navigate: torn between creditor demands for structural improvements of the economy and domestic reform fatigue, the Greek government attempts to please simultaneously the international and the domestic audience yet frustrates both in the process. As a result, the scenario of Grexit over the medium term continues to loom large, though few observers expect it to be imminent given the 12th July 2015 accords between Greece and its creditors.

A better understanding of Greece’s current travails requires adding both a regional and historical dimension. Not only has Greece itself suffered more than its fair share of financial crises since political independence in 1832, but these apparently recurring events have been embedded in a regional context prone to financial instability. To begin with the present: Greece’s economic problems – a twin deficit (budget and current account) financed by capital inflows before the 2008 global financial crisis which was brought under control thereafter only by outside financial help – are widely shared regionally, though on a lesser scale. Romania, the second largest South-East European (SEE in the following) economy after Greece, for instance, received 20 billion euro between 2009 and 2011 as part of the European Union balance-of-payments assistance programme (in conjunction with the International Monetary Fund) and has since then followed two similar programmes (2011-13, 2013-15), yet without drawing actual funds.

Furthermore, SEE’s current travails stand in a long tradition of persistently weak government budgets, government debt-build up and default, entry into and exit from the dominant fixed exchange-rate system of the day and, last but not least, a delicate relationship between national government and foreign creditors. The Greek experience has tended to be more extreme, yet structurally similar to Bulgaria, Romania and Serbia/Yugoslavia, the other three Balkan countries with a monetary history stretching back to the 19th century. Uncovering and analysing this rich tradition and reflecting on potential lessons of the past for Greece and SEE today are the purpose of a new EHES working paper by Matthias Morys from the University of York.

The paper is fundamentally concerned with two seemingly simple questions. First, why was adherence to both the Classical Gold standard and the interwar gold standard so short in SEE compared to the rest of Europe despite the clear political intention to join? Second, what was the experience with fixed exchange-rates? All four countries conducted fiscal policies inconsistent with monetary policy required to join and successfully adhere a fixed exchange-rate system. While there was strong political will to join the gold standard in all four countries, political actors failed to realise (or were unable to implement) balanced budgets as a pre-condition for successful adherence. Persistent budget deficits were either closed through seigniorage or capital imports.

Yet while seigniorage and (excessive) capital imports were problematic on their own, it was their combination (with strong doses of each) in the period ca. 1875 – 1895 that gave rise to a feature characteristic of the SEE experience with fixed exchange-rates ever since: financial supervision. Greece and Serbia accepted such an arrangement after their defaults (in 1893 and 1895, respectively) as part of a debt restructuring; Bulgaria “voluntarily” acceded to it in 1902 as precondition for another international loan. Creditor countries insisted on an end to inflationary finance and set the countries on a path of monetary stability that eventually saw them join the gold standard (Bulgaria: 1906; Serbia: 1909; Greece: 1910). Foreign lenders did not do this for altruistic reasons; they rather saw – not unlike today in the euro area – stable exchange-rates as a means to avoid currency mismatch and hence ensure debt repayment. Yet by improving fiscal capacity, financial supervision achieved what purely domestic initiatives for currency stabilisation since the mid-1860s had eluded: not falling for the perennial temptation of debt monetisation. The resurrection of the gold standard in SEE in the 1920s followed a similar pattern. De jure stabilisation in the late 1920s required all four countries to take out international loans in order to replenish currency reserves. In return, they had to accept a considerable amount of foreign financial supervision as well as serious restrictions on debt monetisation.

In seven of eight analysed cases, then, joining the gold standard was either preceded by several years of financial supervision (Bulgaria, Greece and Serbia before World War I) or coincided with international loans-cum-conditionality (the interwar experience); only Romania followed gold on its own between 1890 and 1912. This interconnectedness – which was not shared by any other region of Europe – raises interesting questions: was the infringement on national sovereignty which financial supervision entailed a price worth paying for sound money? 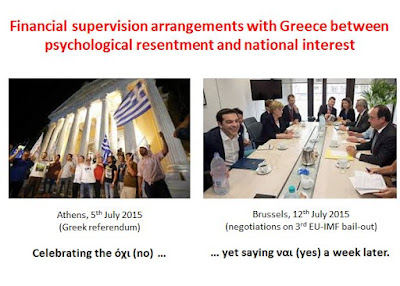 The fact that the current financial monitoring is not a first in the country’s history is not lost on the average Greek. It makes dealing with the current crisis all the more difficult, as it feeds on a widespread perception that the real economic and political power lies with “outside forces”. While Greece’s international creditors would be well advised to pay more attention to this psychological undercurrent, it is worth highlighting also the positive effects of financial supervision. In a region in which governments routinely fell for the perennial temptation of debt monetisation, foreign pressure achieved what domestic institutions had eluded: break the dominant pattern of fiscal dominance and allow monetary policy to be rule-based. In so doing, financial supervision in cooperation with national governments not only lived up to the specific details of a debt restructuring agreement or a League of Nations loan; it allowed the gold standard legislation – which commanded broad political support yet had been dormant often for decades in the face of fiscal dominance – to be eventually implemented.

Herein lies arguably the lesson for the present. Euro membership commands broad support among the Greek public (ca. 80%). Fully aware of its own poor track record in monetary policy, Greece deliberately “tied its own hands” by entering the euro in 2001. Many Greeks fear that “untying their own hands” – i.e., a return to the drachma – would revive the inflationary finance of the past. In an attempt to save euro membership, Greeks are grudgingly accepting the financial monitoring by the IMF and the EU, following the time-honoured path of their forefathers under the gold standard. Greek people suffer from the infringement on national sovereignty which the financial supervision comes with. This sentiment is psychologically most understandable, and we witness exactly the same in the 1890s and again in the 1920s. Yet here comes the second key lesson from economic history for today. The perceived antagonism between Greece and its creditors in the 1890s and the 1920s – including the strong reaction against the lenders which were mainly the British at the time – was short-term and quickly forgotten. What weighed much more importantly to Greeks was that the political and economic objective of exchange-rate stabilisation was achieved.

This ambivalent reaction was at full display again in July 2015, when Greek voters first triumphantly rejected the bail-out demands by the creditors in a referendum, only to be signed by the Greek prime minister a week later. The first one was an expression of deep frustration, an understandable reaction by the Greek people after five difficult years; the second one was based on cool-headed analysis by the Greek government on how to maintain the long-run political and economic goal of exchange-rate stabilisation.

The lesson then for today might be this: Give precedence to what Greece desires most: continued membership in the European Monetary Union. Stay the course with a programme that may ask for a great deal but is – certainly in the eyes of the Greek electorate – far superior to leaving the euro. And, last but not least, disregard the noise and the occasional bad temper on all sides, for what matters most is the final outcome.

This blog post was written by Matthias Morys, lecturer at the University of York.
The EHES working paper is downloadable here: http://www.ehes.org/EHES_84.pdf