The two keynote speakers were Joan Roses from the LSE, who spoke on the topic of “Regional Inequality in Europe: A long-run view, 1900-2010” on the Thursday, and Karine van der Beek from Ben-Gurion University who spoke on “The relationship between human capital and technological change in 18th century England”. Both keynotes were in my mind exemplary in that they gave engaged introductions to the key debates in their respective fields – regional perspectives on economic development, the role of human capital or not during the first industrial revolution. Hearing directly from leading researchers in different fields how they think about their previous and current research, as well as their reflections on debates they are engaged in (was human capital really important for Britain’s industrial revolution?) is always enlightening, and for someone who works neither on regional perspectives nor the British industrial revolution, both talks were fascinating and rewarding. 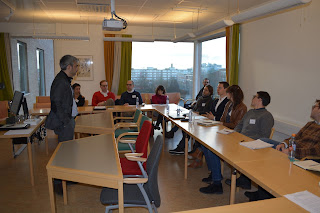 The paper presentations were no less interesting. It was a refreshingly hardcore economic history program, full of quantitative studies of well-defined issues. I noted that among the 17 presentations, 10 included the year span of the study, while another four included periodizations (“interwar period”, “19th century”, “pre-industrial Europe”, “late-Victorian Briain”). All the studies were empirical and most of them brought forward new data, or used old data in thoroughly new ways. The way it should be in economic history, if you ask me.

The morning session of the first day included Oisín Gilmore (University of Groningen) on “Working Time in Industry (1870-2000): A new dataset”, Andrea Papadia (LSE) on “Fiscal Capacity, Tax Composition, Decentralization and the Cyclicality of Government Revenues in the Interwar Period”, and Karol Borowiecki (University of Southern Denmark) on “The Role of Immigrant Artists on the Development of Artistic Clusters in Major U.S. Cities: 1850 to the Present”. Oisin’s study relates to the well-known studies of Michael Huberman of working hours c. 1870–1910, and points out that actually, when it comes to work-time reduction in Europe, most of the action is around 1920, after Huberman’s data ends but before Maddison’s data begins. As someone working on the eight-hour day legislation in Sweden in 1920, naturally I was very sympathetic to this presentation. Andrea’s presentation concerned measuring “fiscal capacity” in the interwar years, looking at tax revenues and their volatility. One of the discussions around this paper was the classical one about how to capture causality in a historical case, how well the instruments work, etc. I think that by now it’s not really an economic history workshop if you don’t have this discussion about at least one of the papers! Karol’s presentation looked at the immigration of different type of artists to the US – actors, composers, etc. – where they ended up in the US, and what kind of labor economics effects their arrival had on native-born artists in these locations.

The second session was a very pan-Scandinavian one, including Edda Torsdatter Solbakken from Statistics Norway on “The distribution of tax and wealth in the early 19th century”, Cristina Victoria Radu from University of Southern Denmark on “The effect of serfdom on labor markets”, and Ewa Axelsson from Umeå University on the saw mill industry in northern Sweden 1880-1910. Edda Torsdatter Solbakken’s paper exploits a peculiar 19th century wealth tax design in Norway. To fund the setting up of a national central bank, a wealth tax was introduced, but without comprehensive investigations into the actual wealth of citizens. One might therefore suspect that some powerful citizens might have understated their own wealth to pay less tax, and this is the research question of the presented paper. Cristina Victoria Radu’s paper looks at a Scandinavian historical reform of another kind: the abolition of one kind of serfdom in early 18th century Denmark and then the re-introduction of another version of it. Radu uses the temporal variation in workers’ freedom to estimate the effects on wages of serfdom. Ewa Axelsson presented not a paper per se but her dissertation work, on the environmental and social effects of the saw mill industry’s domination in a region in northern Sweden during industrialization in the late 19th century and early 20th century. For example, companies had voting rights in Swedish municipalities during this period, so in quite a few of the municipalities in this region, a majority or near majority of votes were held by sawmill companies: a fascinating historical case for political economy analysis. I might be biased since I’m Scandinavian, but I thought that this was a superb session, with three extremely interesting studies of various forms of inequality and power in 18th-19th century Scandinavia.

The Thursday afternoon session included again three presentations, all which introduced novel datasets: Chiara Martinelli from Università di Firenze on “Industrial and artistic industrial schools in Italy - A new provincial dataset”, presented for the first time very detailed maps on the location industrial and artistic schools in Italy. Kristoffer Collin from Gothenburg University talked about the wage structure during the First Industrial Revolution in Sweden, with a paper based on new data on industrial wages from 1860–1879. Lastly, Alexander Donges from University of Mannheim presented a paper on patenting activity during Germany’s Early Industrialization, arguing that railway construction was a leading sector and that technology transfers were crucial in Germany’s early industrialization. Donges presented a novel dataset of German patents for the period before 1877.

Unfortunately I missed the conference dinner, at an Italian restaurant in downtown Lund, so I can’t give you a restaurant review. But from what I heard the food was good, and from the somewhat later than scheduled timing of arrivals the morning after, I infer that people had fun too. J

The session after lunch started with myself, Erik Bengtsson from Lund University, talking about “Capital shares and income inequality: Evidence from the long run”, a paper co-authored with Daniel Waldenström of Uppsala University. Then came Cristián Ducoing from Umeå University, with a paper called “A Sustainable Century? Genuine Savings in developing and developed countries, 1900-2000”, and the final presentation of the session was Henric Häggqvist from Uppsala University on “Was It All Protectionism? – The Structure of Swedish Tariffs 1780–1830”. (Henric has since defended his dissertation successfully, so congratulations Dr. Häggqvist!) Without having a headline, I think this session could still be summed up as a kind of “historical macro” session: Cristián’s presentations and my own were both oriented to historical national accounts in different ways (mine from the income side, Cristián’s from the expenditure side), and Henric’s concerned new estimates of tariffs and trade for different goods in Sweden from 1780 to 1830.

The final session included two presentations: Alexandra López Cermeño from Universidad Carlos III de Madrid on “The localisation of big cities: destiny or chance? United States 1930-2010”, and Leonard Kukic from the LSE on “Socialist growth revisited: Insights from Yugoslavia”. Alexandra López Cermeño focused on the role of universities in generating local spillo-vers and urban economic growth using up-to-date econometric techniques. , Leonard Kukic on the other hand took a novel approach to the general discussion about the efficiency of planned economies in the post-war period, showing for Yugoslavia that TFP was not the most quantitatively significant cause of Yugoslav failure. Rather, he finds that, labour frictions were a major constraint on socialist growth.

To sum up, I thought that this was a really great workshop. Good keynotes held by senior scholars who also participated in discussions of the papers in helpful and critical ways, 17 purposeful and focused presentations and lots of good discussion, with a plenty of participation and comments, made for a very stimulating experience. Kudos to the SOUND organizers Kerstin Enflo (Lund) and Jacob Weisfdorf (University of Southern Denmark), and especially to the local organizers, PhD students Thor Berger and Hana Nielsen!

Lastly, special thanks to financiers Handelsbankens Forskningsstiftelser for making this workshop possible.