This column uses network analysis to review the development of economic history over the last 40 years. It shows how economic historians are interconnected through their research, which scholars are most cited by their peers, and the main debates within the discipline. The survey also shows that after 2000, the number of publications rapidly accelerated. This rise has been driven by research conducted at continental European universities instead of those from the US and UK.

Table 1. Journals included in the review

Network analysis in Economic History
Figure 1 shows the relatedness among economic history. Network analysis is based on the assumption that authors cited together share some kind of intellectual affinity. Hence, a network map captures how authors (and, consequently, the ideas and debates associated with them) sit in relation to each other across the field. In the network map, bubble sizes (nodes) correspond to the number of citations received by each author, while the distance between bubbles corresponds to the tendency for authors to be cited together within articles. Clusters (represented by different colors) group together bubbles (i.e. authors) that display some degree of similarity according to research topics or debates.
As reflected by the bubble size and position, the most important economic historian in the network is Jeffrey Williamson. Williamson is well-known for showing that globalization began in the early 19th century and not before (during the time of Columbus) and for exploring America’s income distribution since 1650. He is followed by Robert Allen, who defended a ‘high wage economy’ thesis for England to industrialize first; Nicholas Crafts, who conducted research on growth accounting and England’s industrialization; Richard Steckel, who shed new light on the health of the slaves in the US South and the development of well-being in America and Europe over the very long-run; and Peter Lindert, who explored the causes and effects of modern fiscal redistribution and the interaction between social spending and economic growth. From a list including 325 scholars, other well-positioned economic historians in the network are Gregory Clark, Jan Luiten van Zanden, Sara Horrell, Stephen Broadberry, Joerg Baten, Jane Humphries, Knick Harley, John Komlos, Robert Margo, Cormac Ó Gráda, David Jacks, John Turner, Kevin O’Rourke, Deborah Oxley, Price Fishback and Hans-Joachim Voth. 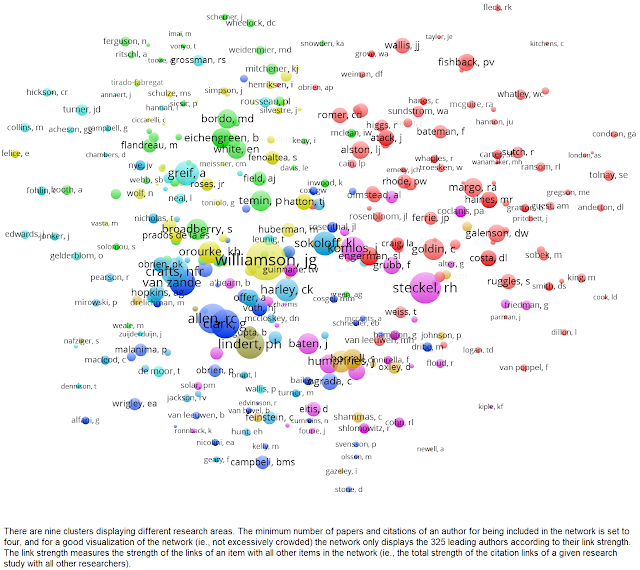 Network analysis also allows us to visualize what economic historians are doing research on and the main debates within the discipline. Figure 2 maps the keywords listed in the articles studied. Research on economic growth (yellow bubbles), i.e. exploring why some countries became rich while others stayed poor, has been the most important area in terms of publications. Another vigorous area of research has been the social history of demography (blue bubbles), that is, exploring changes in fertility, health and mortality. Green bubbles correspond to papers devoted to changes in inequality driven by wealth, labor markets and migration; while bubbles in turquoise (tracking keywords such as ‘revolution’, ‘real wages’ and ‘property rights’) connect with yellow and blue bubbles at the crowded center of the network and with some thematic areas (red bubbles) such as market, economic depressions, the gold standard and the railroads. Red bubbles also include some statistical keywords such as ‘models’, ‘time-series’ and ‘cointegration’, which display the important component of statistics in the discipline. 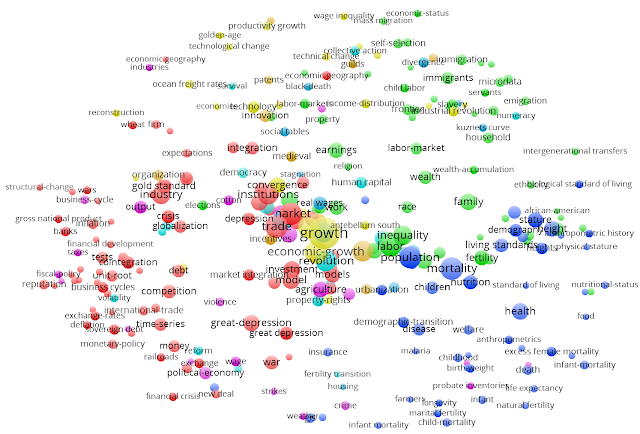 Recent trends in publications
Finally, a look at the number of publications in the main economic history journals (Figure 3), reveals that the number of publications was fairly constant between 1980 and 2000 and then rapidly accelerated after 2000. This rise after 2000 has been driven by a shift in publication distribution from the US/UK to continental Europe.[3]
The percentage of articles published in the top economic history journals by scholars working in US universities plummeted between 1980 and today (going from 60% to 30% of all scholars), whereas economic historians working in UK and non-European universities (chiefly, Canada, Australia and Japan) maintained their publication shares at 17% and 14%, respectively. Hence, the rise in the number of publications since the early 2000s appears to be due to continental European-based economic historians; countries most responsible for the change in the publication trend were Germany, the Netherlands, Spain, and Italy.
European universities are not only the ones leading the discipline in terms of quantity (number of publications), but also in terms of quality as measured by the adjusted number of citations.[4] For instance, since 2010, these universities received, on average, 5.5 citations for published paper, compared to 5.3 in the UK, 4.2 in the US, and 3.8 outside these three areas. This hierarchy differs from earlier periods. For 1980-1989, the US was the leader in accumulating citations (18.8 citations per paper), followed by the UK (15.0), Europe (13.0), and other areas (12.7). For the period 1990 and 1999, the UK received 17.6 citations per paper, compared to the US (15.7), Europe (14.6), and outside these three areas (11.6).[5] 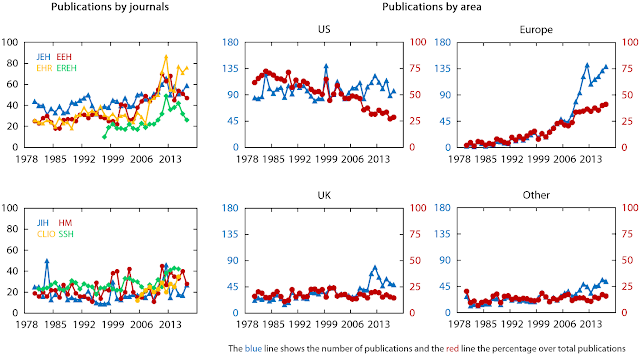 The present study shows that economic history is a dynamic discipline: the evolution of publication trends speaks to the changes in the distribution of academic excellence, and there is clear evidence that a healthy variety of topics capture the attention of researchers across the globe. We cannot know how the field will evolve but, as we enter the third decade of the 21st century, economic historians have every reason to look without complacency but with confidence and excitement at an increasingly open-ended and diverse future based on what we have learnt from our past.


[1] For more details see Galofré-Vilà (2020).
[2] For instance, economic history papers published in the top-five economic journals are narrowly focused on persistence studies that explain present outcomes as a function of events in the distant past. The paper from Acemoglu Johnson and Robinson ‘Reversal of Fortune’ is a good example of this practice.
[3] While the rise of publications by scholars in European universities correlates with the launch of two European journals (EREH and CLIO), the appearance of these two European journals does not seem to explain the success of European scholars. Nearly half of the articles published by these two journals were signed by non-European scholars and since 2000 European based scholars also increased their share in Anglo-Saxon journals.
[4] The EU-14 group consists of Austria, Belgium, Denmark, Finland, France, Germany, Greece, Ireland, Italy, Luxembourg, the Netherlands, Portugal, Spain and Sweden.
[5] Naturally, older papers are more likely to accumulate citations.