blog post based on the article, "Comparing income and wealth inequality in pre-industrial economies: the case of Castile (Spain) in the eighteenth century", available on EHER early view here.

Our knowledge of the evolution of economic inequality within countries in pre-industrial Europe has expanded considerably in the last years. The two most important dimensions of economic inequality in the literature are related with income (a flow) and wealth (a set of assets); although many researchers implicitly assume that these two variables are very good substitutes of each other, there is no study on the relationship between these two variables for pre-industrial Europe.

In general, incomes are composed by the returns to physical assets (capital or land), to financial assets, to human capital and to raw labor; on the other hand, for a given person or household, the stream of incomes influence savings that accumulate in future wealth. The relative importance of the different kinds of assets in total wealth and in the generation of income, changed substantially with economic growth. In modern societies, the agricultural sector plays a relatively minor role in aggregate production, income inequality is only weakly linked to the distribution of land property and a large bulk of income inequality is related with labor incomes and retribution to human capital (Shorrocks 1982). However, in traditional pre-industrial economies, most of the population worked in the primary sector, land and labor were the most important productive factors and land property was a major source of income, power and status. In these economies, where average human capital was relatively low, most of economic inequality is expected to be explained by land distribution; even though labor retributions can be an important share of the total value of production, if labor is evenly distributed across individuals, its contribution to total income inequality would be small. So far, many scholars have relied on the methodological assumption that, in preindustrial economies, inequality of assets like land or real estate could be considered a reasonable proxy of income inequality because the different subsets of wealth would correlate very well with each other and all of them would correlate very well with income (for instance, Alfani 2015; Lindert 2014; Alfani and Ammannati 2017).

We have scrutinized the validity of this assumption in our paper. In highly urbanized commercial junctures, trading capital is probably important as well as Soltow and Van Zanden (1998) assume for Amsterdam in the eighteenth century and even in less economically advanced societies, labor income differences can be important: Nicolini and Ramos-Palencia (2016) have suggested that labor incomes contribute up to 65% of income inequality in urban areas of Old Castile in the 18th century and Álvarez and Ramos-Palencia (2018) have stressed the importance of human capital to explain income inequality in the same region and period. 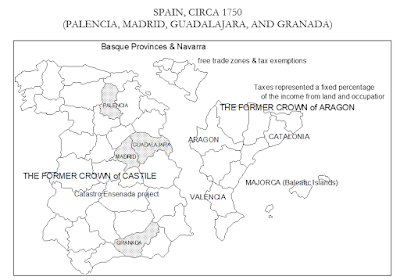 Our article presents a new data set to analyze economic inequality in Spain based on information, circa 1750, from Palencia, Madrid, Guadalajara and Granada. This data set has some unique characteristics. First, it combines information from two different sources: probate inventories, which contain detailed descriptions of household wealth; and the Ensenada Cadastre, a mid-century government census that contains information about household income, the contribution of each income source (for instance land or labor) to total income and other characteristics like household head’s occupation and ability to sign. Second, the data set enables us to link the households from the set of inventories with their corresponding records in the Cadastre; this connection makes it possible to analyze the relationship between the income of a household when the Cadastre was produced and the wealth of that household some years later, when its head passed away. This data set opens the possibility to link the distributions of income and wealth so that we can propose hypotheses via which their differences can be better understood and the possible shortcomings of using one as a proxy for the other.

We find that the income assigned by the EC and the wealth registered in the PIs are closely associated suggesting that, even though income inequality seems to be consistently less than wealth inequality, both variables capture very well a unique dimension of economic inequality in pre-industrial economies and that a given household’s location in one distribution depends strongly on its location in the other. Given that many times, data scarcity forces researchers to use the distribution of wealth, real estate or other assets to approximate the distribution of income (Alfani 2017, Lindert 2014), the confirmation that household’s wealth can be a very good predictor of income is extremely valuable from a methodological point of view.

Using an econometric specification in which both income and wealth are stated in terms of their logarithms the elasticity of income with respect to wealth varies between 0.4 and 0.6 (depending on the specification). These values imply that a 10% increase in the wealth of a household is associated with its income being from 4% to 6% higher. Elasticity that is less than 1 is consistent with general observations –confirmed with our data- that wealth inequality is greater than income inequality. 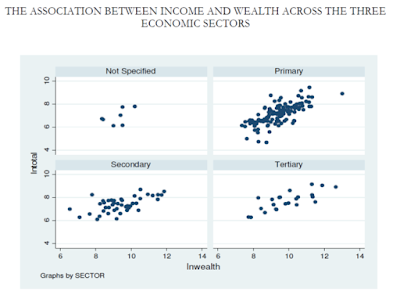 The parameters associated with our Secondary and Tertiary dummy variables are positive and the former is statistically significant in all the specifications. This result suggests that, for a given level of wealth, households with a head who works in one of those sectors, particularly in the secondary sector, tend to have more income than households with a head who works in the primary sector. Variables proxying human capital also have a sizable impact on the income distribution: for a given level of wealth those heads of households with skills (mainly captured by the kind of occupation but also by the ability to sign) have significantly larger incomes than those without skills highlighting the importance of the human capital in the determination of labor incomes (Álvarez and Ramos-Palencia 2018). 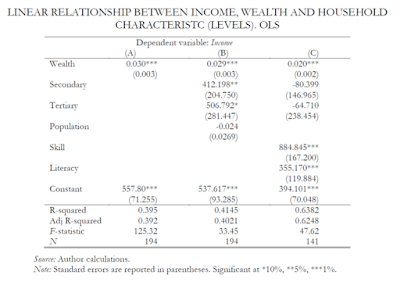 For instance, using the parameters obtained in the regression in levels (see specification C in the table above), we can compare the income predicted by our equation for a head of a household without any wealth or human capital and working in the agricultural sector (394 reales) with the income predicted for a similar household but with some human capital; if we add literacy to this head of the household, income would increase 90% (up to 749 reales) and if we predict the income with a high-skill occupation income would increase 224% (up to 1278 reales).

These examples show that the way in which the wealth and income distributions are related is more complex than the one suggested by a pure traditional and agricultural society in which land and real estate are the only productive assets generating social differentiation. Our results suggest the relationship between income and wealth can be affected in some non -trivial ways if the whole society or some households experience shocks like mortality picks or migration (voluntary or forced) that change the nature and strength of that correlation. This multidimensional nature of the income inequality is not necessarily surprising and the roles of different kind of assets and human capital in the income distribution have been already emphasized for urban sophisticated economies in 17th and 18th centuries (Soltow and Van Zanden 1998). However, the confirmation of this pattern in a relatively backward and traditional economy (Alvarez-Nogal and Prados de la Escosura 2013) would suggest that in Modern Europe, structural change, urbanization and sophistication of labor markets would generate complex changes in the income distribution and in the relationship between overall income, income sources and wealth that can be overlooked if we focus only on one dimension of economic inequality.