Optimism or pessimism? A composite view on English living standards during the Industrial Revolution

blog post based on the article, "Optimism or pessimism? A composite view on English living standards during the Industrial Revolution ", available on EHER here.

The consequences of industrialization for the living standards of the mass of the population have been intensively debated ever since the days of William Blake, Karl Marx, and Charles Dickens. Over a period of roughly 100 years after ca. 1750, Great Britain set the basis for a dynamic and self-sustained process of economic development that eventually would improve the lives of millions of people. Although the positive outcomes of this process for human well-being since the 19th century are not disputed, the same does not apply to the years between 1750 and 1850. New methods of production and labor organization brought economic benefits, but they had a deep impact on citizens’ lives and the environment, as illustrated by the picture below. 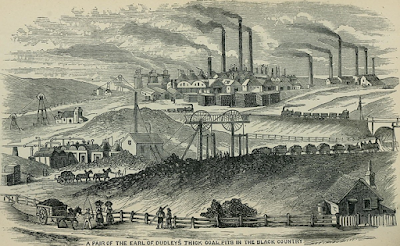 On one side, a branch of the literature, represented by the so-called optimists, has argued that the benefits of improved methods of production trickled down in the form of substantial real wage increases after the Napoleonic wars (Clark, 2005; Lindert & Williamson, 1983). On the other side, the so-called pessimists have found that the increase in real wages was much less pronounced than what the optimists claim (Allen, 2009; Feinstein, 1998). Also, further supporting the pessimists’ case, health levels stagnated after the 1820s, annual working time reached new heights in the 1830s, and inequality remained at high levels (Allen, 2019; Broadberry, Campbell, Klein, Overton, & van Leeuwen, 2015; Voth, 2001; Wrigley, Davies, Oeppen, & Schofield, 1997).

The lack of consensus on the evolution of living standards during the classical years of the industrial revolution partially stems from the study of a large number of indicators individually. This can be problematic because these variables often exhibit opposite trends, thus having disparate implications for the analysis of well-being. One way to deal with this is by building a  composite index of welfare combining information on a number of key aspects of people’s lives into a single metric.

We take this approach and build a new indicator to study workers’ living standards during the early phase of industrialization that combines four dimensions of well-being: income, health, working time, and inequality. We draw on Jones and Klenow (2016) to construct a metric that aggregates the utility flows that an average British worker could expect from them those four aspects of living standards. By using utility theory, this article provides a novel and interesting perspective to the literature, which has mostly relied on other methodologies to construct similar indicators.

Our analysis of the evolution of workers’ well-being during the traditional period of early industrialization (i.e., 1760–1850) presents three main findings. First, unlike earlier composite indices or income per capita, our broad welfare series points to worsening living standards until 1800 (see column II in Table 2 of the article, reproduced below). This is the result of a steep rise in both working time and income inequality after 1760 that is not accounted for by other traditional indicators. Welfare growth rates could have been highly negative if life expectancy had not increased by 5 years between 1760 and 1800. 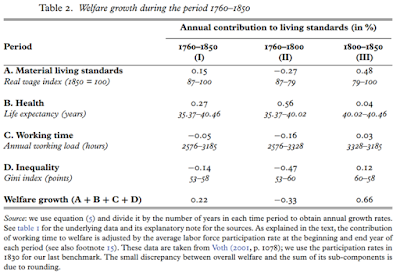 Second, we find that well-being improved after 1800 when real wages started rising and the negative effect of longer working time and higher inequality reached a plateau. Although well-being grew by almost 0.7 percentage points annually during these years (column III, last row), the resulting average level of welfare by the mid-nineteenth century does not support an optimistic interpretation of the evolution of workers’ living standards. According to our results, welfare was only 22 percent higher in 1850 than in 1760.

Our third main finding is that welfare exhibits much lower growth than our widely-used measures of overall living standards. If we consider GDP per capita, our calculations suggest that national income tends to overestimate welfare growth for the average citizen during the period by 20 percent. On the other hand, if we consider the well-known Human Development Index or the Dasgupta and Weale index, we find that they show a clear improving pattern between benchmarks, whereas our metric shows a much more pessimistic pattern, especially before 1800.

The last decades of research into the consequences of the industrial revolution have brought a large amount of evidence on a number of economic, demographic, and social aspects of English workers’ lives in the 18th and 19th centuries. An important part of this new evidence is characterized by painting a more complex picture of what earlier generations of scholars initially brought forward and by adding new indicators that revealed opposite movements of well-being for sub-periods.

This article uses an encompassing framework of living standards to put together information about four key aspects of the lives of citizens at that time: material living standards, health, working time, and inequality.  We find that earlier studies drawing on composite indices of well-being are probably too optimistic about trends before 1800, since they do not fully take into account rising annual working time and increasing inequality. By 1850, our calculations show that welfare was 22 percent higher than in 1760 (20 percent less than the improvement in living standards suggested by GDP per capita). Therefore, welfare gains from health and material living standards slightly compensated for the negative effects of increasing levels of working time and inequality.

While encompassing, our indicator does not measure other important aspects of England’s welfare at the time, such as access to knowledge through education, environmental damage, or the social costs of the factory system. Their study in the future may reinforce our view that workers’ lives would not change substantially until the post-1850 period when the productivity benefits of the new forms of production trickled down to the working classes and public health regulation tackled the poor health conditions of the population.