On the 2nd of June 2015 Marc Di Tommasi and Zoi Pittaki organized a FRESH meeting in Glasgow on the theme “Migration, Entrepreneurship and Social Change”. The University of Glasgow hosted the event and let us use as a venue the historical Lilybank House, a lovely building constructed in the 1830s and extended by Alexander "Greek" Thomson in the 1860s.
The rationale behind the event has been realising the deep connections and intersections between migration and entrepreneurship, and wanting to explore this space with a particular attention to social change. This influenced the very structure of the conference with three different sessions each dedicated to the three theoretical linchpins. 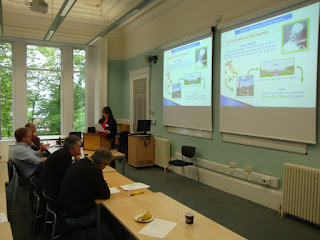 The first session, chaired by Iida Saarinen from the University of Edinburgh, was dedicated to migration with two interesting papers that nicely set the tone for the rest of the day.  First of all Claudia Rei, from Vanderbilt University of Nashville, Tennessee, posited extremely  interesting methodological questions in her search for the “Historical counterfactual” to the Jewish diaspora caused by Nazi expansion. Then Jimyong Lim, from King’s College, London, managed to overcome the disappearance of his laptop and delivered a talk on the racist anti-Japanese movement that prospered in the United States at the turn of the twentieth century.
After the delegates took a well-deserved coffee break they reconvened for the migration keynote speech, where Professor Richard Smith, from the University of Cambridge, summed up the long history of the “urban graveyard” debate and presented the latest historical demography data from the London parish of St. Martin in the field. The subsequent debate, long and lively, further explored the concepts introduced. 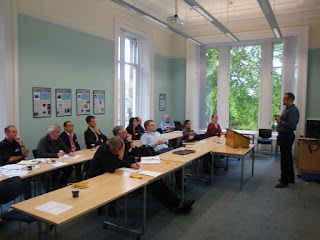 After a lunch break where we all had a change to enjoy the quite tasty Glasgow hospitality we all reconvened for the entrepreneurship keynote speech. Professor Dan Wadhwani, from the University of the Pacific, expounded on the theoretical framework behind the concept of entrepreneurship and the role played by the migrants in a very well received talk.

This was followed immediately by the session on Entrepreneurship, chaired by Jimyong Lim, from King’s College, London. First of all Valentina Sgro, from the Italian Università degli Studi del Sannio, with her co-author Vittoria Ferrandino stuck home, explored the rich and eventful business history of the Italian food industry in the USA. The audience was enthralled in discovering the hidden Italian origins of many famous American brands, like Mr. Peanut. Then Peter Bent, from the University of Oxford, took us in an entirely different direction with a quantitative analysis, helped by his advanced econometrics skills, of financial crises in the gold standard era. His hypothesis on the role of capital flows spurned serious interest from the economists in the audience.
After the last coffee break, surely these historians need a lot of coffee to get going, the third and final session started. This session, chaired by Peter Bent, from the University of Oxford, was dedicated to Social Change and, in the intention of the organisers, helped to pull together the various strands of the conference by concentrating on the effects on the social sphere. First of all Mathias Blum, from Queen’s University, Belfast, presented Irish anthropometric data from the period of the “potato famine”. The surprising results, that the Irish which not migrated displayed greater heights and so greater living standards, prompted a lively discussion with many different explanation proposed by the audience. The last paper of the conference was presented by Iida Saarinen from the University of Edinburgh, and it dealt with the life histories of the Scottish Roman Catholic seminarians and how to complete their studies they had to spend an exceptionally long period abroad. This had an obvious influence on their outlook and therefore on their pastoral activity when they came back to Scotland.
With the end of the conference proper a lovely dinner followed where the delegates sampled more of the Scottish cuisine and explored in an informal setting some of the themes of the long day.
This event wouldn’t have been possible without the fundamental financial support of the Economic History Society, the Centre for Business History in Scotland and the European Historical Economics Society.